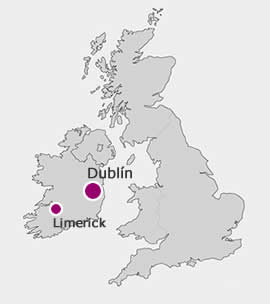 The English course takes place in the English school in Griffith College, one of the universities in the city. It offers excellent facilities and has a perfect location in the city center.

All teachers have many years experience in teaching English. The school is accredited by the Higher Education Colleges Association (HECA) and ACELS

The school is accredited by:

Limerick is a real gem that extends along the glorious Shannon river. The city is a charming little medieval center that knows how to preserve its traditions, its beauty and its history through time whilst developing as a major industrial center.

The old part of town and the medieval quarter are at King's Island, located between the River Shannon and the Abbey River. This whole area has been completely renovated, houses painted cheerful colours and restored buildings have returned to their original splendor.

Years ago the city was known only as an industrial and port center; now it has become a very quiet town with a dynamic university and many young people. Limerick is mainly famous for its surroundings: the towns are renowned for their beauty, and there are places like Castleconnell, Adare and Killmallock, filled with a special magic.

In the region, nature prevails and the landscapes are spectacular. You can not miss the Cliffs of Moher, vertical walls of black rock with a height of 205 meters.

Things to see and do in Limerick

Moving around the city

Things to do in Limerick

ideal for those that want to have enough time for their studies whilst enjoying their free time to visit the city and sightsee.

The afternoon classes are electives. You can choose from Business English, exam preparation or conversation classes

General English + 5 extra lessons in the afternoon From 13:30 to 14:15 or from 15:00 to 16:15 The afternoon classes are electives: you can choose between Business English, Exam preparation or conversation classes.

Throughout the year, the school organises social activities and excursions. Each week you can take a look at the social and cultural programme and sign up to what you want.

Normally two cultural activities (museums, galleries .. etc) a week and a full day excursion at the weekends are organised. The full day trips are not included: the price is about 35 €.

This list is only an example of the activities organised by the school:

The residence consists of blocks of apartments shared between students. It is perfectly located in the center of the "college town" with supermarkets, restaurants and sports facilities in the resort. Each apartment has 4 -5 single rooms with private bathrooms. Shared kitchen and living room. All blocks are fully equipped.

Room Type: Single or double rooms (for those who travel together)

If you want to live in an English speaking environment, we recommend that you choose to stay with a host family. Our families have been carefully selected. It is ideal for students who want to immerse themselves in a different culture. Note that families live in suburbs outside the center.
Full board is available - that is breakfast, lunch and dinner every day. Lunch Monday to Friday will be a packed lunch to bring with you.


How to get there

The companies that fly to Limerick from Spain are:

From the airport to the city

The students say that...