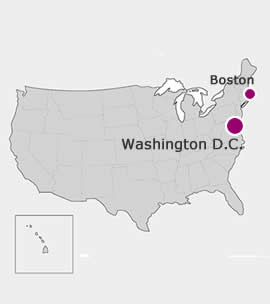 The English school in Boston

The language center in Boston, founded in 1992, has a great location in the city center. Faneuil Hall Square is a historic area full of restaurants, shops and entertainment venues. The academic center is close to public transport stops which greatly facilitates travel. The nearest metro station is State Street. English courses include General English programmes, exam preparation and academic year courses. All teachers are fully qualified, native speakers and have many years of experience.

Mix of nationalities in the school

The school is accredited by:

Boston is an old city and as such, has a long history. Founded in 1630 by the British, it is considered one of the most culturally significant cities in the United States. Headquarters of the 50 university campuses is the city with the highest educational level in the country, because its famous and prestigious universities Harvard and MIT (Massachusetts Technology Institution) are located here. Boston is a bourgeois and a prosperous city, with a large student population that attracts students from around the world.

Its economic stability is not only based on their academic field but also in research and development, electronics, finance, engineering, tourism, technology and biotechnology. The city is considered "the Athens of America" ​​as it has more than 100 educational and research centers and more than 250,000 students, both undergraduates and English courses. This young and intellectual environment has consequences such as the amount of leisure activities and the prices of the theatres, concerts etc..

The public transport service is managed by the MassachusettsBay Transport Authority. There are four metro lines (blue, green, red and orange). Lines are open Monday to Saturday from 05.00-01.00 and Sundays from 05.20 to 00.45. The metro goes by the name "T". It is the oldest in the United States and is one of the best options for getting around the city. There is a transport card that lets you use the four subway lines and buses for 1, 3 or 7 days unlimited travel.

The MBTA also operates 13 commuter rail lines, three boat services and 185 bus routes. Public buses are cheaper and have more stops than the subway, although it is more difficult to find.
A single ticket costs U.S. $ 1.25 on the train and U.S. $ 0.90 on the bus.

What to see in Boston - neighbourhoods and city tours

The city is organised into small and characteristic neighborhoods, perfectly communicated between one another. Therefore, unlike most cities in the United States, it is a pleasure to explore on foot.

Among the most important universities include:

At night in Boston

»Want to know more about studying in Boston? Contact us

This English course will help you to improve your English knowledge and to improve fluency in daily life contexts. It is ideal for students that want to gain more confidence, and is focused around the 4 main aspects of the language: speaking, listening, reading and writing.

It includes 20 lessons per week (15 hours of class): The classes are in the mornings. In the summer months, there can be afternoon classes from 14:30-17:45

Visa is not required

This English course will help you to improve your English knowledge and improve fluency in daily life contexts. Also, you will attend personalised classes for your weak points in the 4 extra elective hours.

This programme includes 24 lessons, 18 hours of class per week.

This course combines a standard course of 20 lessons per week + 10 extra hours.

This English course will help you to improve your English knowledge and improve fluency in daily life contexts. Also, you will attend personalised classes for your weak points in the 10 extra elective hours. It is ideal for students who want to feel more confident, and is focused on the 4 main aspects of the language: speaking, listening, reading and writing.

This course is orientated around the preparation of one of the most respected exams in the world. The TOEFL exam is well-known by thousands of universities, institutions and businesses in more than 130 countries, amongst those include the UK, USA, Canada and Australia. The course will prepare the students so that they have the best chance of getting a good grade in the exam.

It is recommended to reserve 4 or 8 weeks of the course. This includes 24 lessons - 18 hours per week. There is also availability for the most intensive courses of 30 lessons (22.5 hours) per week.

This course is a combination between 20 standard English classes and 10 Business English classes. This intensive English course will help you to improve your fluency, precision, and capability of communication up to a level that you need to be able to work with confidence in the English-speaking world of Business.

There is also availability in the Business course for a longer duration (24 weeks). Contact us for more information.

Taking the time to focus on learning English will open many doors. This programme is for students that want to study for 24 weeks or more. You will develop fluency, precision and you will have an adecuate use of English in the 4 skills of the language.

You will benefit from excellent guidance, monitoring and feedback throughout the course.

The English School in Boston offers a lot of activities that you can participate in during your English course. Activities are the best way of practicing your language, with visit to museums, cinemas or the theatre. The first day, all of the new students are invited to a free welcome event to get to know each other and get to know the staff at the school. Also, you will be able to enjoy a varied activity progamme during your stay.

Speak more English and experience a cultural trip away with a Boston family. Accommodation with a family offers tranquility and all the comforts of home. You can practice your English with your host family in a comfortable and relaxed environment. As a member of the family, you will live and eat with them. Lots of students love to be part of the family and feel an extra sense of security. You will receive a warm welcome, comfort and homemade food.

School distance: from 45 to 60 minutes by public transport

The North End apartments are the best option from a social point of view. You will be able to enjoy the independent lifestyle and have high quality accommodation at a good price. The apartments are shared amongst students from the school. They offer single bedrooms with bathroom or double with a shared bathroom, kitchen and living room are also shared. The apartments have marble surfaces and new equipment, living room with all the comforts such as flatscreen TV.

The apartments can be found in a very pretty area filled with shops and restaurants. It is also very close to the school, less than a 15 minute walk.


How to get there

How to get to Boston

The Boston Logan International Airport is one of the largest in the United States. It is located in the metropolitan area of ​​Boston, Massachusetts 6 km northeast of the city.

The companies that fly to Boston from Spain are:

From the airport to the city

10% discount on all programmes